FireFox Gold Grows High-Grade Zone at the Mustajärvi Project in Finland with 16.45m of 7.69g/t Gold in Latest Drilling

SODANKYLÄ, FINLAND – (September 9th, 2021) – FireFox Gold Corp. (TSX.V: FFOX)(OTCQB: FFOXF)(“FireFox” or the “Company”) is pleased to announce the results of the final four holes of the Phase 4 diamond drilling program at its 100%-owned Mustajärvi Project. These results confirm a considerable down dip extension of previously drilled high-grade gold. Drill hole 21MJ010 intersected multiple significant gold intervals, the highlight of which was 7.69g/t gold over 16.45 metres, including 42.47 g/t gold over 0.9 metres.

In addition, drilling encountered several new intervals of alteration and gold mineralization at depth that may suggest growing potential with depth.

Carl Löfberg, President and CEO of FireFox, commented about the latest encouraging results, “This extension of high-grade gold to depth at Mustajärvi is a real breakthrough for FireFox. Not only has our team been able to predict, test, and intercept new high-grade gold occurrences along strike for more than a kilometre, but we can also now visualize and model a strong mineral system growing in thickness with depth. A core rig will arrive back on site in early October, and we will proceed with a pattern of closely spaced step out holes to fully evaluate this high-grade zone. We shall also be testing new targets at depth and farther to the northeast.”

The Mustajärvi Project lies along the highway between the cities of Kittilä and Sodankylä, approximately 17 kilometers east of Kittilä. The property straddles the Mustajärvi Shear Zone (MSZ), a major right-lateral shear zone that has associated second and third-order structures which further dissect the project into separate structural zones. The Sodankylä Group rocks, which are primarily to the north of the shear zone in the footwall, include metamorphosed sedimentary and volcaniclastic rocks. Geophysics and drilling have identified an extensive corridor of albite – sericite alteration in the footwall along more than two kilometers of the structure. The project remains at an early stage as FireFox and predecessor companies have drilled less than 7,000 metres to date.

FireFox has developed a structural model that has identified repetitive dilatant zones along the MSZ where vein swarms and higher-grade gold are concentrated. There are three main areas of gold mineralization along a 2.1-kilometre trend, namely the Central Zone, the Northeast Target, and the new East Target (see Figure 2). 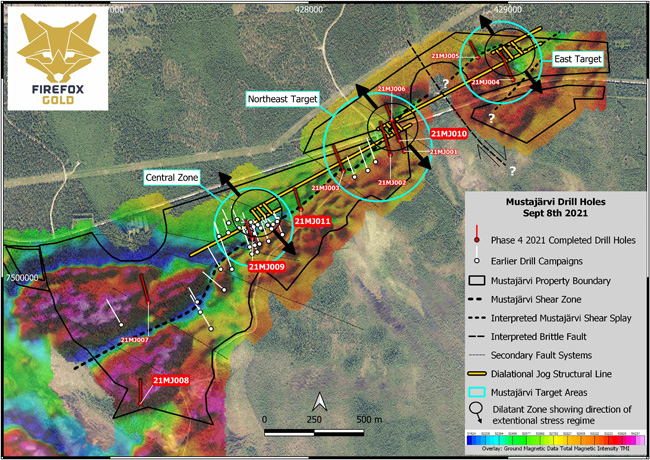 The Central Zone and Northeast Target both host bonanza grade gold associated with clusters of veins in the footwall of the shear zone but are separated by more than 500 metres.   These two areas have been tested by several programs since 2018 that have expanded the lateral extent of known mineralization in multiple directions.

The Northeast Target returned the best intercepts in both the 2019 and 2020 drill programs, and the Phase 4 program has further improved the grades and intervals.  Holes 21MJ001 (reported June 17, 2021) and hole 21MJ010 both returned bonanza grades and approximately 150 gram-metres of gold (expressed as total grade * thickness of mineralization).

Drill hole 21MJ010 was collared 57 metres north-northwest from drill hole 21MJ001 and was drilled with a steeper plunge, in order to confirm the continuation of the mineralization to depth. Interpreting these new data in the context of ongoing three-dimensional modeling, the FireFox technical team has concluded that the high-grade vein system at the Northeast Target continues and thickens down dip (see Figure 1). However, more drilling is required to confirm the true thickness and extent of this high-grade gold system.

Hole 21MJ010 was collared in hanging wall Savukoski mafic volcanics and intersected the intermediate tuffs of the Sodankylä Group at approximately 74m depth. This is consistent with most of the drilling along the Mustajärvi Shear Zone (MSZ), which meanders and forms splays along the zone that often coincides with this major contact. The footwall Sodankylä Group rocks are pervasively albitized along this corridor, exhibiting both brittle and ductile deformation fabrics, but the dominant foliation is nearly perpendicular to the core axis.

The upper contact of the more intense gold mineralization is marked by bladed calcite with open space, similar to the upper zone observed in hole 21MJ001. The gold is hosted in multiple quartz–carbonate-tourmaline-pyrite (QCTP) veins, including disseminated and locally semi-massive to massive pyrite. Among the pyrite and telluride minerals in the veins, the team has also confirmed the presence of molybdenite. The veins have similar characteristics to those intersected up dip in hole 21MJ001.  The high-grade vein system strikes approximately 50° NE and dips 60° SE.

The intensity of albite alteration (+ sericite and silica) increases downhole. The two deeper gold intercepts reported at 323m and 345m, respectively, are significant.  The upper zone is another relatively narrow QCTP vein, which appears to include very fine-grained visible gold, but the deeper intercept is associated with more subtle disseminated pyrite in albite-altered tuffite with tourmaline veinlets. So far, it has been rare at Mustajärvi to see gold associated with disseminated sulphides.

The FireFox team believes that the increasing intensity of alteration with depth in the Northeast Target may be favorable for the depth potential of the system. Drill hole 21MJ010 is the deepest hole drilled in this area to date, and it stands out as having passed through 20 mineralized veins, each with at least anomalous gold content.

Drill hole 21MJ011 tested the Company’s structural model by drilling the area between the interpreted dilatant zones of the Central Zone and Northeast Target.  Several moderately albitized and broken zones with limited tourmaline veining and narrow quartz veins were intersected, but no significant gold intervals were detected.

The only hole of the Phase 4 program to target the Central Zone was 21MJ009. This hole was drilled more steeply than prior holes in an area of previously reported high-grade gold. Several strongly albitized intervals contained evidence of multiple phases of deformation, likely confirming the presence of the down dip extension of the shear zone. However, there were relatively small amounts of pyrite and tourmaline, and correspondingly low grades of gold intercepted, with only one notable interval of 2.21g/t over 0.7 metres recorded at 66.3 metres downhole.

Finally, drill hole 21MJ008 was drilled near the far southwest extent of the Mustajärvi permit. The hole was located proximal to a gold-in-till anomaly and drilled to test for the presence of the MSZ passing through the gabbro. Although locally strongly albitized gabbro was intersected, no significant gold grades were returned.

The core was transported from the rig to the Company´s core storage facility in Sodankylä, where FireFox’s exploration team conducted the geological and geotechnical logging and selected the assay intervals.  Assay intervals were generally 1 metre but in some circumstances were modified according to lithological boundaries and other factors. FireFox geologists maintained chain of custody and sampling procedures according to best industry practice and with due attention to quality assurance and quality control, including sampling field duplicates and insertion of certified standard and blank samples.

The Company is also pleased to announce that President and CEO, Carl Lofberg and Chairman, Patrick Highsmith will be presenting the latest update from the Company's Finland projects in a live webinar taking place on Monday, September 13th, 2021, at 1 p.m. PT / 4 p.m. ET. The webinar will be hosted by Focus Communications Investor Relations (FCIR) and Cory Fleck of the Korelin Economics Report. Participants are encouraged to submit any questions for the company prior to the event by e-mailing FCIR at This email address is being protected from spambots. You need JavaScript enabled to view it..

FireFox Gold Corp.
Email: This email address is being protected from spambots. You need JavaScript enabled to view it.
Telephone: +1-778-244-8439

Forward-looking statements in this release may include statements regarding: the intent to conduct additional drilling, the belief as to the location of the most prospective gold targets; the location of possible new targets for future drill programs; the current and future work program, including the extent and nature of exploration to be conducted in 2021 - 2022 and the potential expansion of the same, and the significance of the most intense alteration and mineralization occurring at depths below previous drilling at the Northeast Target. Although we believe the expectations reflected in our forward-looking statements are reasonable, results may vary.