VANCOUVER, BC – (July 12, 2018) – FireFox Gold Corp. (“FireFox” or the “Company”) is pleased to report that it has completed an extensive Bottom-of-Till (BOT) sampling program and received all analyses, at its 100%-owned Mustajärvi gold exploration project in Lapland, Finland (“Mustajärvi”). The results of the survey highlight an area of anomalous gold and other trace elements associated with interpreted faults and magnetic anomalies that stretches for approximately two kilometres. The Company’s preliminary interpretation of these data indicates that the area of interest for additional exploration extends well beyond the zone of historic drilling.

“Our team worked through the winter and completed the BOT sampling program on budget and with no major difficulties,” commented FireFox CEO Carl Löfberg. “As with many orogenic gold deposits, the mineralization at Mustajärvi is structurally controlled. Based on these data, the system may be more extensive than the historical drilling indicated. Having also recently completed an Induced Polarization (IP) survey on the project, we continue to advance our exploration towards identifying a substantial deposit in the area.”

The Mustajärvi gold occurrence lies near the southern margin of the Paleoproterozoic Central Lapland Greenstone Belt (CLGB), in close proximity to the shallow south dipping transcrustal Venejoki thrust system. The gold mineralization in the Mustajärvi area is similar to that of many orogenic gold deposits hosted by volcanic rocks, where the gold is associated with pyrite-bearing quartz and quartz-tourmaline veins within albitized mafic volcanics and volcaniclastic rocks. The known auriferous quartz-tourmaline-pyrite veins at Mustajärvi are hosted at or near the contact between metavolcanic and metasedimentary rocks. Coarse supergene gold in rock samples from the near-surface environment is associated with concentrations of as much as 440 ppm tellurium, as well as elevated levels of bismuth, selenium, and cobalt. Other common pathfinder elements such as silver and arsenic also correlate with gold.

This sampling program was designed: 1) to duplicate limited historical sampling lines by the Geological Survey of Finland (GTK) across the known mineralization; 2) to expand the sampling further east and west along the interpreted strike of the mineralization; 3) to infill historical sampling in the NE part of the license area where high-grade gold-in-till anomalies had been encountered; and 4) to systematically sample an area in the southern part of the license, where the GTK reported abundant native gold grains in historic till samples.

Altogether, 598 BOT samples were collected and analyzed from the Mustajärvi prospecting permit area. This sampling campaign traversed a total of approximately 6 line kilometres oriented approximately north-south, perpendicular to the strike of known mineralization. Sample spacing along lines was 10 metres in areas close to known mineralization and 20 metres in new areas of interest.

Given the low background content of gold in the local Lapland glacial till, Company geologists believe that gold contents in these samples of more than approximately 40 ppb (0.040 ppm) are potentially significant and worthy of follow-up exploration. Samples containing more than 100 ppb (0.100 ppm) appear to be highly anomalous in this area. The highly anomalous samples occur along a corridor stretching for approximately two kilometres, apparently associated with interpreted faults and magnetic anomalies. These anomalies occur over an area that may be much larger than previously believed based on drilled historic mineralization (See Figure 1, below). The multi-element anomalies complement the gold data and identified several new targets for follow-up away from the known gold-hosting structures. The occurrence of widespread narrow gold and trace element anomalies is consistent with an extensive quartz-vein system associated with faulting in intensively altered greenstones and metasediments.

The most significant gold anomalies extend westward from the historic drill-indicated mineralization, including the maximum gold value identified in the survey of 2,540 ppb (2.54 ppm). Other important new anomalies appear to follow the margins of magnetic highs and track magnetic linears outlined by the Company´s ground magnetic survey over Mustajärvi. The primary linear magnetic feature is interpreted to be a second–order fault zone, perhaps related to the first-order transcrustal Venejoki fault system (See Figure 2, below). The presence of high gold in till that closely follows this interpreted second-order fault zone to the northeast suggests that the previously known mineralization may be only a small part of a more extensive fault-related gold system. Late northeast striking faults have been interpreted as an important control for some of the orogenic gold deposits in the CLGB.

It should be noted that these are early stage exploration results, similar to soil geochemistry. The potential quantity and grade of gold mineralization related to these anomalies is conceptual in nature.  There has been insufficient exploration on the Mustajärvi property to define a mineral resource and it is uncertain if further exploration will result in the target being delineated as a mineral resource.

The Mustajärvi Project is fully permitted for follow-up trenching and diamond core drilling. The Company continues to evaluate data from its 2018 exploration program in anticipation of drilling later in the year.

Additional details on the project are available from the Company’s website, www.firefoxgold.com .

The base of till sampling was conducted with a percussion drill rig by an experienced contractor Moreenityö Mäcklin Oy, based in Finland.  Moreenityö Mäcklin Oy has 30 years of experience in soil and bedrock sampling in glaciated terrains. The average depth of the drill holes into the glacial overburden was 3.3 metres. The diameter of the drill bit was 35 millimetres, and the diameter of the sampling tube on the drill was 28 millimetres resulting in an average sample size sent to the laboratory of approximately 240 grams.

ALS Laboratories, a leading international provider of assay and analytical data to the mining industry, provided the assay and geochemical data presented in this news release. The samples were prepared in Finland and then then sent to Ireland for analysis. The samples were first dried at 60 °C before being screened to -180 µm and then analyzed by the AuME-TL43 method, which utilizes an aqua regia digestion followed by an ICP-MS finish. All ALS geochemical hub laboratories, including the Irish facility, are accredited to ISO/IEC 17025:2017 for specific analytical procedures. The Firefox Gold QA/QC program includes insertion of certificated standard material and blanks into the analytical batches, which did not show deviations from recommended values.

Dr. Petri Peltonen, Exploration Manager of FireFox Gold, is a qualified person as defined by National Instrument 43-101 – Standards of Disclosure for Mineral Projects. Dr. Peltonen has supervised the collection and interpretation of the technical data generated in the Company’s 2018 field program at the Mustajärvi Project and has helped prepare and approve the technical information in this news release.

Patrick Highsmith, Certified Professional Geologist (AIPG CPG # 11702) and director of the Company, is a qualified person as defined by National Instrument 43-101. Mr. Highsmith has reviewed and approved the technical information in this news release.

FireFox is an unlisted reporting issuer in British Columbia and Alberta and is focused entirely on gold exploration in Finland. The Company holds a 100% interest (subject to a NSR royalty) in the 147-hectare Mustajärvi Property in Lapland. In addition, the Company has entered into an option agreement with Magnus Minerals Ltd. (“Magnus”), a private prospect generator company in Finland, through which it has an option to acquire a 100% interest in three projects (subject to a NSR royalty) that currently encompass approximately 67,000 hectares. In order to complete the option, the Company must invest CAD $2.5 million in exploration on the properties and make cash payments to Magnus of CAD $250,000 over a three-year period (See Silverstone Resources Corp. news release dated Aug 2, 2017). Finally, the Company has executed a non-binding letter of intent with Magnus under which FireFox can acquire 100% interest (subject to a NSR royalty) in approximately 50,630 additional hectares of mineral exploration reservations in Lapland, Finland referred to as the Seuru Properties. Subject to the execution of a definitive option agreement, the Company has agreed to earn its interest in the Seuru Properties by making payments of CAD $200,000 in cash and 1,500,000 shares to Magnus over a three-year period, while investing CAD $1,500,000 in mineral exploration on the Properties. Combined with its other holdings of exploration reservations and ore prospecting permits, the addition of the Seuru Properties will bring FireFox’s total gold exploration portfolio to more than 117,000 hectares or 1,170 square kilometers, all located in Finland.

Finland is one of the top mining jurisdictions in the world as indicated by its 1st ranking in the Investment Attractiveness Index of the 2017 Fraser Institute Survey of Mining Companies. Having a strong mining law and long mining tradition, Finland remains underexplored for gold. Recent exploration results in the country have highlighted its prospectivity, and FireFox is proud to have a Finland based CEO and technical team.

For more information concerning the Company, please refer to the Company’s profile on the SEDAR website at www.sedar.com.

Email: This email address is being protected from spambots. You need JavaScript enabled to view it.
Telephone: 604-558-7687

Forward Looking Statements: The information in this news release contains forward looking statements that are subject to a number of known and unknown risks, uncertainties and other factors, some of which are outside the control of the Company, that may cause actual results to differ materially from those anticipated in our forward looking statements. Factors that could cause such differences include: changes in world commodity markets, equity markets, costs and supply of materials relevant to the mining industry, change in government, changes to regulations affecting the mining industry, whether the Company’s exploration and development activities respecting its prospects will be successful, the ultimate size of deposits on the Company’s lands and the ability of the Company to raise adequate capital to execute its exploration and development plans. Forward-looking statements in this release may include statements regarding the possible extent of the gold system at our Mustajärvi Property in Lapland, plans to continue evaluating data from Firefox’s 2018 exploration program, the potential size of the Company’s total gold exploration portfolio upon exercise of option agreements, and the future exploration programs and the timing thereof including maiden drill targets, operation plans and Finnish mining prospects. Although we believe the expectations reflected in our forward looking statements are reasonable, our forward-looking statements have been based on factors and assumptions concerning future events which may prove to be inaccurate. Those factors and assumptions are based upon currently available information available to Firefox. The forward-looking statements contained in this press release represent the expectations of FireFox as of the date of this press release and, accordingly, are subject to change after such date. Readers should not place undue importance on forward-looking statements and should not rely upon this information as of any other date. FireFox does not undertake to update this information at any particular time except as required in accordance with applicable laws. The forward-looking statements contained in this press release are expressly qualified by this cautionary statement.

NOT FOR DISTRIBUTION TO U.S. NEWSWIRE SERVICES OR FOR RELEASE, PUBLICATION, DISTRIBUTION OR DISSEMINATION DIRECTLY, OR INDIRECTLY, IN WHOLE OR IN PART, IN OR INTO THE UNITED STATES. 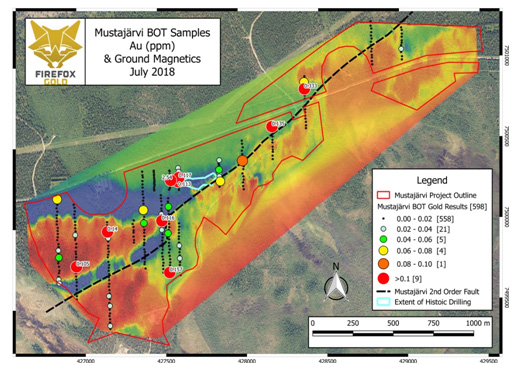