SODANKYLÄ, FINLAND – (August 17, 2021) – FireFox Gold Corp. (TSX.V: FFOX)(OTCQB: FFOXF)(“FireFox” or the “Company”) is pleased to announce that it has extended the drill-indicated gold system by an additional 650 metres along trend from the Northeast Target at its 100%-owned Mustajärvi Project in the Central Lapland Gold Belt of Finland (See Figure 1). Drill hole 21MJ004 was drilled 654 metres northeast of the previously reported bonanza-grade hole 21MJ001 (see Company news release dated June 17, 2021) and yielded 2.9 metres at 1.30 g/t gold. Drill hole 21MJ005, which was collared 580 metres from 21MJ001, returned 3.79 g/t gold over a 1 metre interval from 15m downhole, sitting atop a wider zone of weakly anomalous gold. 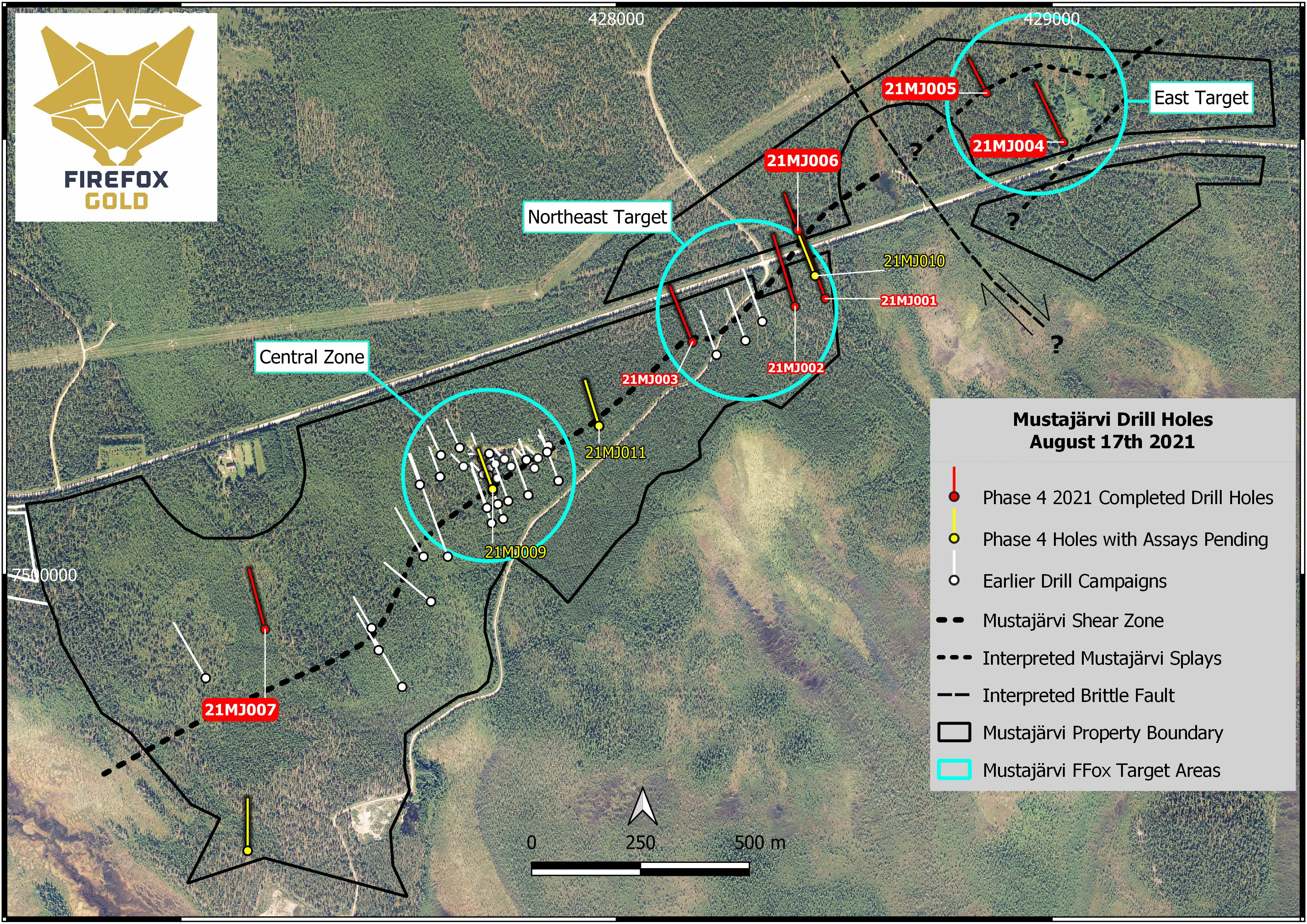 Key Implications from the Newest Mustajärvi Results Include:

“These two holes were the first to test for mineralization in this newly modeled part of the shear zone, so we are very excited to confirm new gold intercepts with similar alteration, vein mineralogy, and geochemistry to the established high-grade areas in the Central Zone and the Northeast Target. These first gold hits at the East Target are important because we know that persistence and hard work yielded bonanza grade intercepts at both the Central and Northeast Targets. Adding these new targets to the close step-outs planned around 21MJ001, we have some incredible targets lined up for the fall and winter drill program, which is fully funded,” commented Carl Löfberg, President and CEO of FireFox.

In addition to the East Target holes, drill hole 21MJ006 was collared 170 metres northwest from 21MJ001, along the same drill section of the Northeast Target. It appears to have been successful in intersecting the lower grade up-dip continuation of the vein system that contained the bonanza grade, here averaging 3.0 metres of 1.31 g/t gold. Also reported herein is hole 21MJ007, which targeted interpreted structures within the gabbro on the western end of the property, but for which no significant gold results were received.

The individual veins encountered in the northeast part of the project have variable continuity, but some have been intersected along strike for more than 70 metres. The vein system hosting bonanza-grade gold that was intercepted in 21MJ001 also appears to have been intercepted down-dip in 21MJ010 (for which assays are pending). These gold-bearing veins occur in swarms with potential for expansion along strike and at depth. In addition to 21MJ010, analytical results and geological interpretations are pending for three additional holes, 21MJ008, 21MJ009 and 21MJ011.

The Mustajärvi Project lies along the highway between the cities of Kittilä and Sodankylä, approximately 17 kilometers east of Kittilä. The property straddles the Mustajärvi Shear Zone (MSZ), a major right-lateral shear zone that has associated second and third-order structures which further dissect the project into separate structural zones. The Sodankylä Group rocks, which are primarily to the north of the shear zone in the footwall and host most of the known mineralization, include metamorphosed sedimentary and volcaniclastic rocks. Geophysics and drilling have identified an extensive corridor of albite – sericite alteration in the footwall along more than two kilometers of the structure. The project remains at an early stage as FireFox and predecessor companies have drilled less than 7,000 metres to date.

FireFox has developed a structural model that has identified repetitive dilatant zones along the MSZ where vein swarms and higher-grade gold are concentrated. The main areas of mineralization, so far, are the Central Zone and the Northeast Target, both of which host bonanza grade gold associated with clusters of veins in the footwall of the shear zone but are separated by more than 500 metres. Including drill intercepts southwest of the Central Zone and extending through the Northeast Target, the MSZ hosts high-grade (>5 g/t) gold in arrays of narrow quartz veins along a corridor of more than 1.5 kilometers. The FireFox team predicted another dilatant zone with similar characteristics 500 to 600 metres farther northeast from the Northeast Target (See Figure 2). Drill holes 21MJ004 and 21MJ005 were the first holes to test this area and the results confirm this zone as a new and additional zone of gold mineralization (the East Target) – extending the favorable trend to more than 2.1 kilometers. 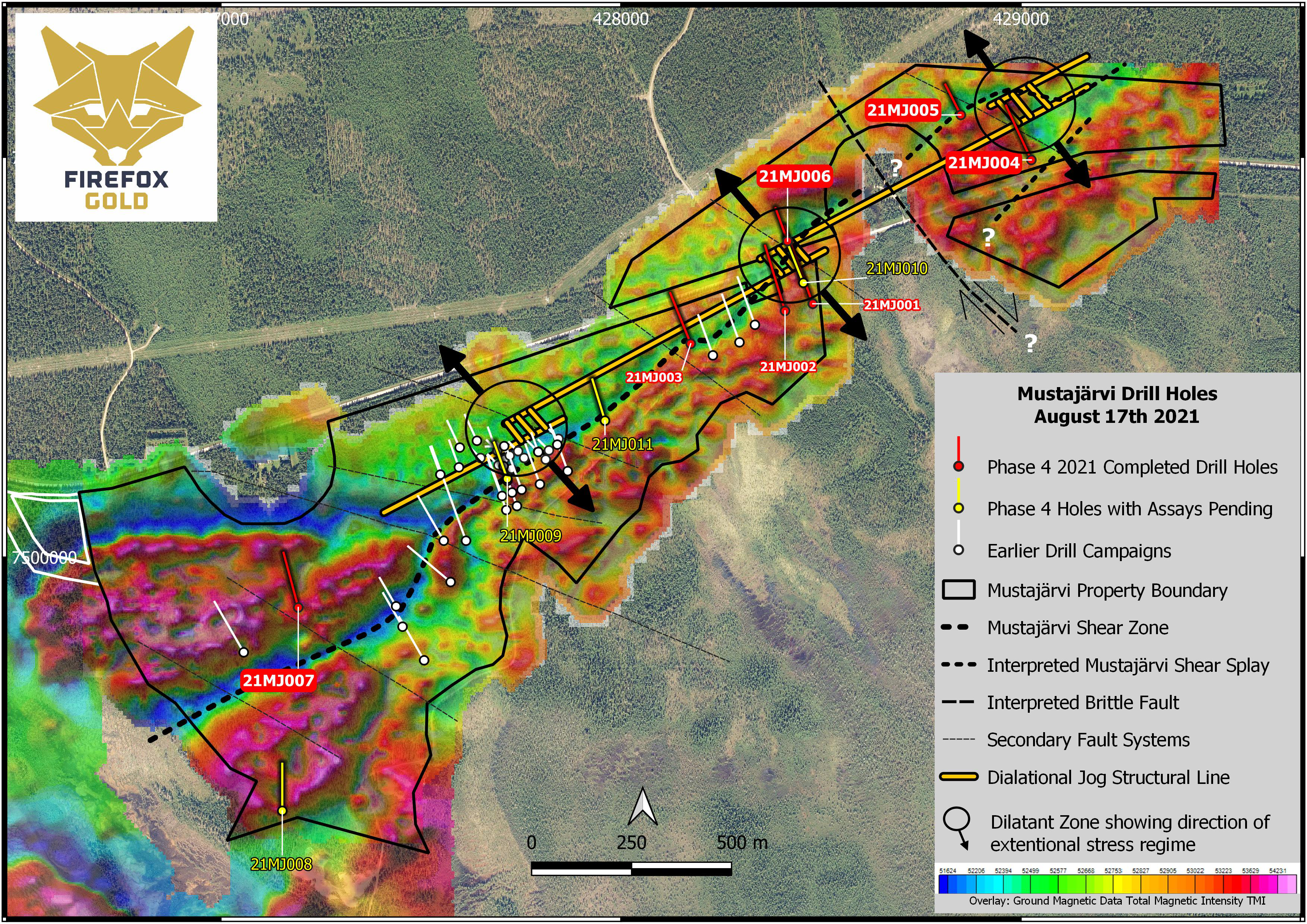 The Central Zone and Northeast Target have been tested by several programs since 2018 that have expanded the lateral extent of known mineralization in multiple directions. The Northeast Target returned the best intercepts in both the 2019 and 2020 drill programs, including bonanza grades in the first hole of this Phase 4 program. The initial success at the East Target has prompted planning for considerable new work.

Drill hole 21MJ004 was collared in a structural block interpreted to host the continuation of the MSZ and was directed to the northwest. The hole appears to initiate in Sodankylä Group metasedimentary rocks, variably altered intermediate tuffites, and did not pass through a major lithologic contact with mafic volcanics. The gold mineralization was hosted within an intensively deformed interval that included abundant hematite and quartz-carbonate-tourmaline-pyrite (QCTP) veining at 150.35 to 153.25 metres down hole. The 2.9-metre interval averaged 1.30 g/t gold with a few additional metres of weakly anomalous gold below. There are also several broader intervals of weakly anomalous gold higher up in the hole. The veins encountered in drill hole 21MJ004 have a similar composition to the QCTP veins noted in the Northeast Target, but hematite is notably more abundant at the East Target.

Hole 21MJ005 was collared very close to an interpreted trace of the shear zone. The hole intercepted shallow mineralization within intensively altered intermediate tuffites, where the highest gold grades were encountered at 15 to 16 metres down hole, yielding 3.79 g/t gold. Elevated gold values expanded the anomalous zone down hole to 28.4 metres, including several samples with 0.32 to 0.75 g/t Au. The shallow mineralization encountered in hole 21MJ005 was associated with breccias and QCTP veins and abundant hematite.

Drill hole 21MJ006 was drilled along the same northwest drill fence that includes 21MJ001 and 21MJ010. It was targeted on a base of till (BOT) gold anomaly and expected to test for the up-dip continuation of the vein system with visible gold reported in 21MJ001. The hole intercepted a 3-metre interval of thin QCTP veins at the approximate location where the bonanza vein was projected to occur. This 3-metre zone from 56 to 59 metres downhole averaged 1.31 g/t gold. There are numerous other narrow quartz-carbonate and quartz-tourmaline veins cutting through the altered tuffites in this hole associated with several intervals of weakly anomalous gold, including samples with 0.32 to 0.69 g/t.

Drillhole 21MJ007 was one of the first drill tests of geochemical and geophysical anomalies associated with the gabbro near the west end of the property. It was collared more than 1.5 kilometers west of the Northeast Target. While no significant gold has been encountered yet in the gabbro, the lower third of the hole encountered pervasive strong albitization.

FireFox geologists report that the three zones now known to host significant gold at Mustajärvi are quite comparable in their lithology, alteration, vein mineralogy, geochemisty, and their structural architecture. The interpreted dilational jogs correlate well with magnetic lows (Figure 2), and it is noteworthy that the strongest magnetic lows in the East Target (northeast of 21MJ004) have not yet been tested. A preliminary mineralogical report on the Northeast and East Target gold intercepts reveals that gold occurs both as free gold and as inclusions in pyrite and hematite. The Mustajärvi gold system continues to be consistently enriched in bismuth, tellurium, and cobalt, but the ongoing data compilation is highlighting many other geochemical features that may be useful pathfinder elements to help vector towards stronger gold mineralization. The team is also planning an induced polarization/resistivity (IP) survey over the Northeast and East Targets, as the pyrite-rich mineralization should generate strong anomalies. Combined with mapping and three-dimensional modeling, the new data are expected to yield more strong drill targets for the fall and winter drilling.

The information herein contains forward looking statements that are subject to a number of known and unknown risks, uncertainties and other factors that may cause actual results to differ materially from those anticipated in our forward-looking statements. Factors that could cause such differences include: the receipt of the assay results, changes in world commodity markets, equity markets, the extent of work stoppage and economic impacts that may result from the COVID 19 virus, costs and supply of materials relevant to the mining industry, change in government and changes to regulations affecting the mining industry.

Forward-looking statements in this release may include statements regarding: the intent to conduct additional geophysics and drilling, expectations for the receipt of assays on samples already submitted to the lab; the belief as to the location of the most prospective gold targets; the location of possible new targets for the 2021 - 2022 drill program; the current and future work program, including the extent and nature of exploration to be conducted in 2021 - 2022; and the potential expansion of the same and the significance of the most intense mineralization occurring at depths below previous drilling at the Northeast Target. Although we believe the expectations reflected in our forward-looking statements are reasonable, results may vary.