The most prominent feature emerging from the survey is a multi-line anomaly near the northwest limits of sampling that is comprised of a spatial association among gold and several other trace elements. There are at least two other robust anomalies farther south and east. Each of the major anomalies is associated with major interpreted structures and magnetic anomalies that could be favorable settings for gold deposits (see Figure 1). The core drill will arrive at Utsamo in November, so the FireFox team is readying drill sites based on these BOT data.

Key takeaways from the Utsamo BOT survey include:

Carl Löfberg, President and CEO of FireFox, commented, “We have recently seen the value of quality BOT sampling with the Rupert discovery at Area 1, and now the FireFox team has delivered some great results at Utsamo. We knew that Utsamo occupied a major structural corridor where the Sirkka Shear Zone bends from dominantly east-west to dominantly north-south. Now we can see geochemical evidence of a gold system that heightens the importance of the 2021 drilling that is about to begin. We are excited for the Utsamo target to become our second prospect tested this fall, as the drill will soon depart Mustajärvi.”

Base of Till Program Summary and Interpretation

Similar to other gold exploration projects in the Central Lapland Gold Belt (CLGB), such as Rupert Resources’ Area 1 Discovery, this part of the Jeesiö Project is covered by glacial sediments of varying depths. BOT sampling is a very useful tool to prospect through this cover by capturing samples of the basal till or bedrock. Sometimes the BOT anomalies may be transported “down-ice” by glacial processes and subsequent groundwaters, but in other cases the anomalies may be very near their source. This is partially due to the fact that this part of Lapland is near the origin of the glaciers. 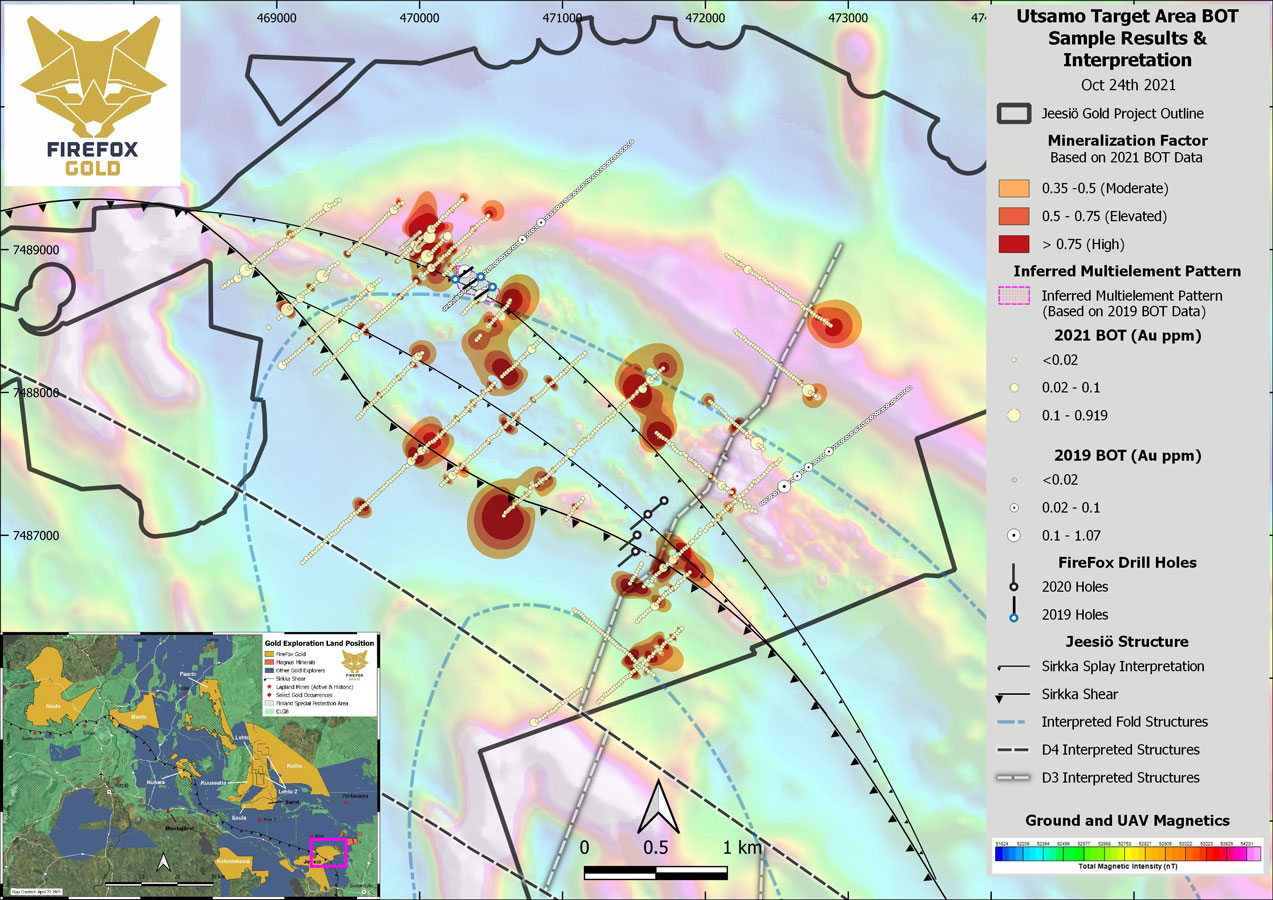 The Utsamo Corridor is a five-kilometre-long zone of complex folds, faults and shears developed along a flexure in the SSZ. A BOT survey with numerous survey lines and closely spaced sample sites was planned to test prospective geological, structural, and geophysical targets within the structural corridor. Between March and August of this year the FireFox team completed the detailed BOT sampling program with 1,012 sample points in an area spanning approximately 3.5 by 4 kilometres where bedrock is covered by an estimated 5 to 30 metres of glacial overburden. This brings the total BOT samples at Utsamo to 1,233.

ALS Global labs analyzed the BOT samples using an aqua regia digestion and ultra-trace analysis for gold and a suite of 50 elements.  FireFox employed industry standard quality assurance protocols during the sampling program, including the inclusion of analytical control samples. The quality of the data was found to be good. There are numerous gold anomalies across the survey area and they are not confined to a single geologic unit but appear to be related to faults and major interpreted lithologic contacts. While the maximum gold values reach as high as 0.919 ppm, the most prospective anomalies are likely where gold anomalies correlate with other important pathfinder elements such as arsenic, bismuth, tellurium, and antimony.

The FireFox team and its technical advisors employed principal components and factor analysis of the large multielement database to identify targets and map geology. The statistical analysis captured at least two multi-element associations that may be related to buried gold systems. One statistical factor that is believed to be significant in the Utsamo targets includes a simple gold (Au) – tellurium (Te) association. There is another more complex association that maps more extensive anomalous patterns, including elements such as antimony (Sb), molybdenum (Mo), arsenic (As), mercury (Hg), bismuth (Bi), lead (Pb), tellurium (Te), and zinc (Zn). By grouping these multielement responses into one statistical factor, referenced here as the “Mineralization Factor”, more information can be conveyed in a single map, as shown in Figure 1.

The strongest anomalies for this associated group of elements form an arcuate pattern in the northeast part of the target area that is coincident with several gold anomalies. The 2019 drill campaign tested a very small part of this area with three holes, but the anomaly strengthens considerably over a 500-metre trend farther to the northwest from the previous drilling. While the 2019 drilling did not intercept significant gold, those three core holes did confirm the presence of a significant fault in the area (see Company news release dated January 21, 2020) cutting through intermediate to mafic volcanic rocks cut by ultramafic dikes or sills. Confirming the presence of a fault in this area makes the continuation of this anomaly to the northwest even more interesting, particularly given the prevailing ice transport direction in the area coming from the northwest. FireFox intends to drill test this target during November and December.

There are other significant anomalies visible on the map of the Utsamo Corridor.  The southeastern anomaly is very interesting as the multielement association correlates with several gold anomalies associated with another likely splay of the SSZ.  There is also a prominent northeast trending fault that has been interpreted from the magnetics data cutting through the area. Here too FireFox has previously drilled in the area. The four holes shown on the map were drilled in late 2020 and news released on March 5, 2021. The target at the time was an interpreted structural zone cutting through a metasedimentary and volcanic rock package. The reconnaissance drilling was helpful in confirming a fault in the area as well as moderate hydrothermal alteration and associated anomalous trace element geochemistry. The potential drill targets for the 2021 - 2022 drill program will be shifted back to the southeast closer to the interpreted cross fault and anomalous BOT results.

The basal till and bedrock interface was targeted using a percussion drill mounted on a tracked vehicle. FireFox geologists maintained chain of custody and sampling procedures according to best industry practice and with due attention to quality assurance and quality control, including collection of field duplicates and insertion of certified reference materials and blank samples into the laboratory submittals. FireFox team members transported the samples to an ALS sample prep lab in Sodankylä. The samples were first crushed to -2 mm, split and pulverized into 1kg pulps, before being shipped to the ALS facility in Loughrea, Ireland to be measure for gold and a package of 50 other elements to ultra-trace levels after aqua-regia digestion by ICP-MS (method AuME-TL43). ALS Laboratories is a leading international provider of assay and analytical data to the mining industry. All ALS geochemical hub laboratories, including the Irish facility, are accredited to ISO/IEC 17025:2017 for specific analytical procedures.

No QA/QC issues were identified from a review of the analytical data.

The 100%-controlled Jeesiö Gold Project covers approximately 142km2 of the prospective Central Lapland Greenstone Belt, proximal to other exciting recent gold discoveries in Finland. The Jeesiö properties are positioned along the major regional structure known as the Sirkka Shear Zone, a trans-crustal structure that controls the emplacement of most of the orogenic gold deposits in Lapland. The main Jeesiö targets include the Utsamo and Kataja Belt areas. Utsamo is situated directly between Aurion Resources’ Risti and Launi gold occurrences, while Kataja is only two kilometres southwest from the gold-bearing quartz-sulfide vein system at Launi.

Forward-looking statements in this release may include statements regarding: the intent to conduct additional drilling; the belief as to the location of the most prospective gold targets; the location of targets for future drill programs; and the current and future work program, including the extent and nature of exploration to be conducted in 2021 – 2022. Although we believe the expectations reflected in our forward-looking statements are reasonable, results may vary.