SODANKYLÄ, FINLAND – (August 9, 2022) – FireFox Gold Corp. (TSX.V: FFOX)(OTCQB: FFOXF)(“FireFox” or the “Company”) is pleased to report that it has completed a detailed airborne magnetic survey over its 100% controlled Naula Project in Lapland, Finland. Naula is a new project for the Company, lying in the western portion of the Central Lapland Greenstone Belt (CLGB), approximately 13 kilometres west of the town of Sirkka and 28 kilometres northwest from the town of Kittilä (Figure 1). FireFox has identified several strong targets at Naula and has applied for exploration permits covering approximately 26 km2.

The FireFox technical team collaborated with GoldSpot Discoveries Corp. (“GoldSpot”)(TSX.V: SPOT.V) in the interpretation and evaluation of the new survey. Interpretation of the survey data has considerably upgraded FireFox’s understanding of the geology at Naula, which had been based on widely spaced government magnetics surveys and limited work by others in the area. The data appear to indicate the presence of at least two significant NNE-SSW striking structures that had not been previously mapped. If confirmed, such structures can be highly prospective for gold in Lapland. Flexures in the major structures and their intersections with other faults are high priority targets for follow-up exploration.

Carl Löfberg, FireFox’s President and CEO, commented about the progress at the Naula project, “This new geophysics bolsters our belief in the potential for gold discovery at this property. Applying new technology in geophysics and data processing has identified a structural setting that we believe to be analogous to that hosting the Kittilä gold deposit, which is less than 40 kilometres away from the project. The property is large and at a very early stage, but we are excited about the opportunity presented by the hard work to come. We expect Naula to be our sixth permitted project in Lapland during 2023.”

FireFox is currently formulating plans for a till sampling program over the newly identified structural targets. Coincident anomalies in geophysics and till sampling are common drivers of drill targeting in the search for gold in Lapland.

The Naula Project is located in the western portion of the CLGB, just north of the Sirkka Shear Zone (SSZ).  The geology of the area is comprised of the Kittilä suite volcanics, which is dominated by tholeiitic mafic flows and graphite bearing mafic tuffites. This volcanic complex is host to Agnico Eagle’s Kittilä gold mine, located 37 kilometres to the east-northeast. The southern boundary of the project area is located less than 2.5 kilometers north from the SSZ, which hosts the nearby historic Saattopora gold mine and numerous other gold deposits.

The majority of the project area is covered by glacial-fluvial sediments, and the outcrop exposure is extremely limited. Previous explorers of the property completed only 500 metres of diamond drilling for geological mapping purposes, and of that, only one of the nine drill holes reached a depth of more than 45 metres. FireFox’s review of the available data indicates that the project area has multiple structural and lithological similarities to the central part of the CLGB and the Kiistala shear zone, on which the Kittilä Mine is situated. 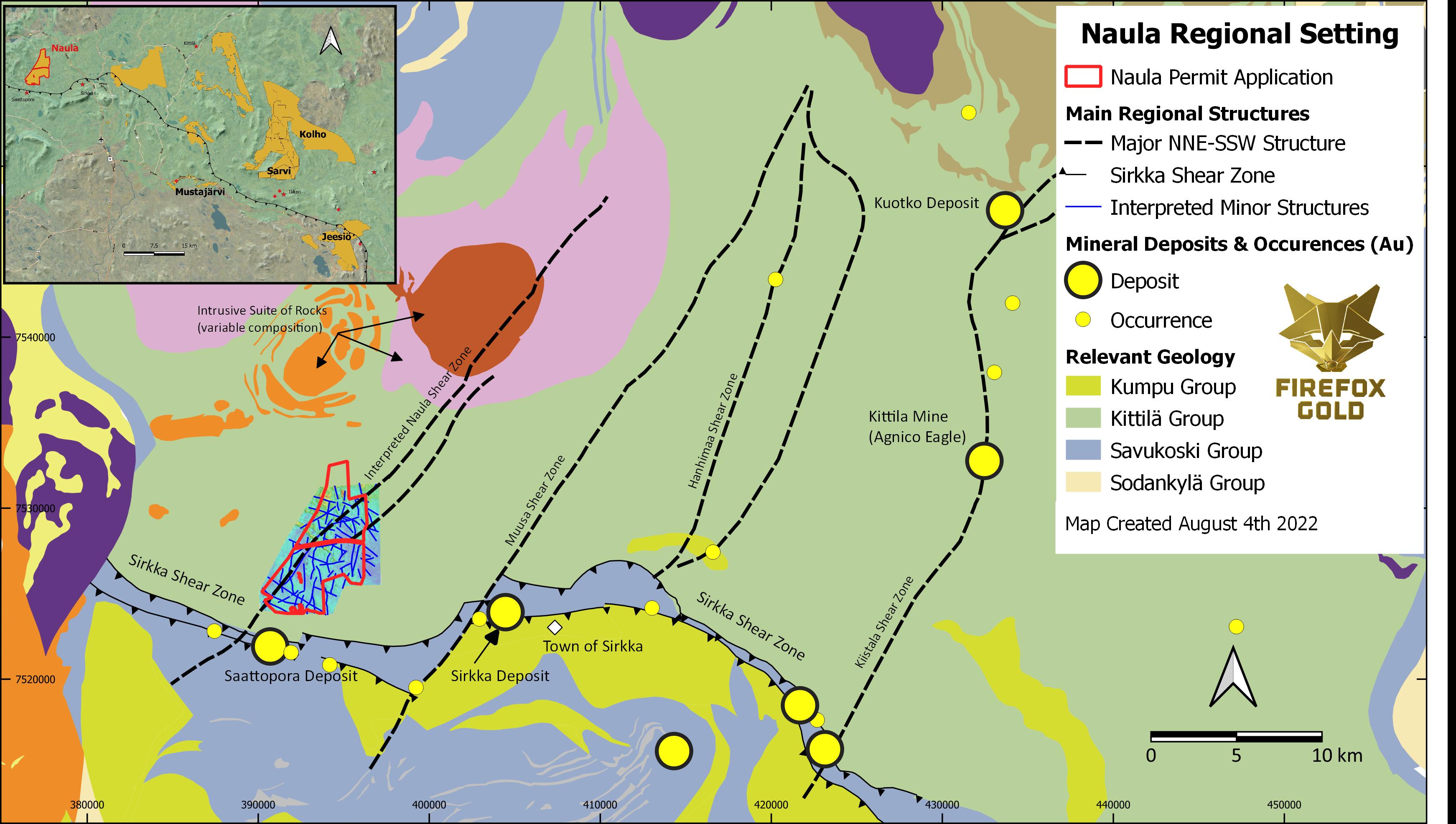 FireFox completed the airborne magnetic survey over the Naula project in early February 2022.  The survey was conducted by the Finnish company Radai, an experienced provider of geophysical surveys using Unmanned Aerial Vehicles (UAV). GoldSpot and FireFox invested additional effort in the interpretation of the data with a focus on identifying possible crustal scale structures and related off-setting faults. This type of structural setting is believed to be prospective for gold mineralization, mimicking the deformation history of the NNE-SSW striking Kiistala shear zone and other significant gold-hosting structures in the region. The 3D inversion of the magnetics reveals at least two significant linear patterns of magnetic low that strike NNE across the property. The westernmost of these is much more significant than the eastern one. Potentially favorable targets occur along that structure where it deflects or intersects with other faults (Figure 2).

In addition to the NNE-SSW major structures, the survey confirmed the presence of numerous NW-SE structures that had been mapped in the area. These are roughly parallel to the throughgoing SSZ and may be related splays of that giant fault system, which is believed to be earlier than the NNE-SSW shear zones (often called a D3 or third deformation event).

Naula had previously been part of a much larger exploration reservation, and FireFox has applied for an exploration permit covering approximately 26 km2 of what it considers to be the highest priority ground in the area. Once granted, the permit will allow for mechanized exploration such as base of till (BoT) sampling and diamond core drilling. 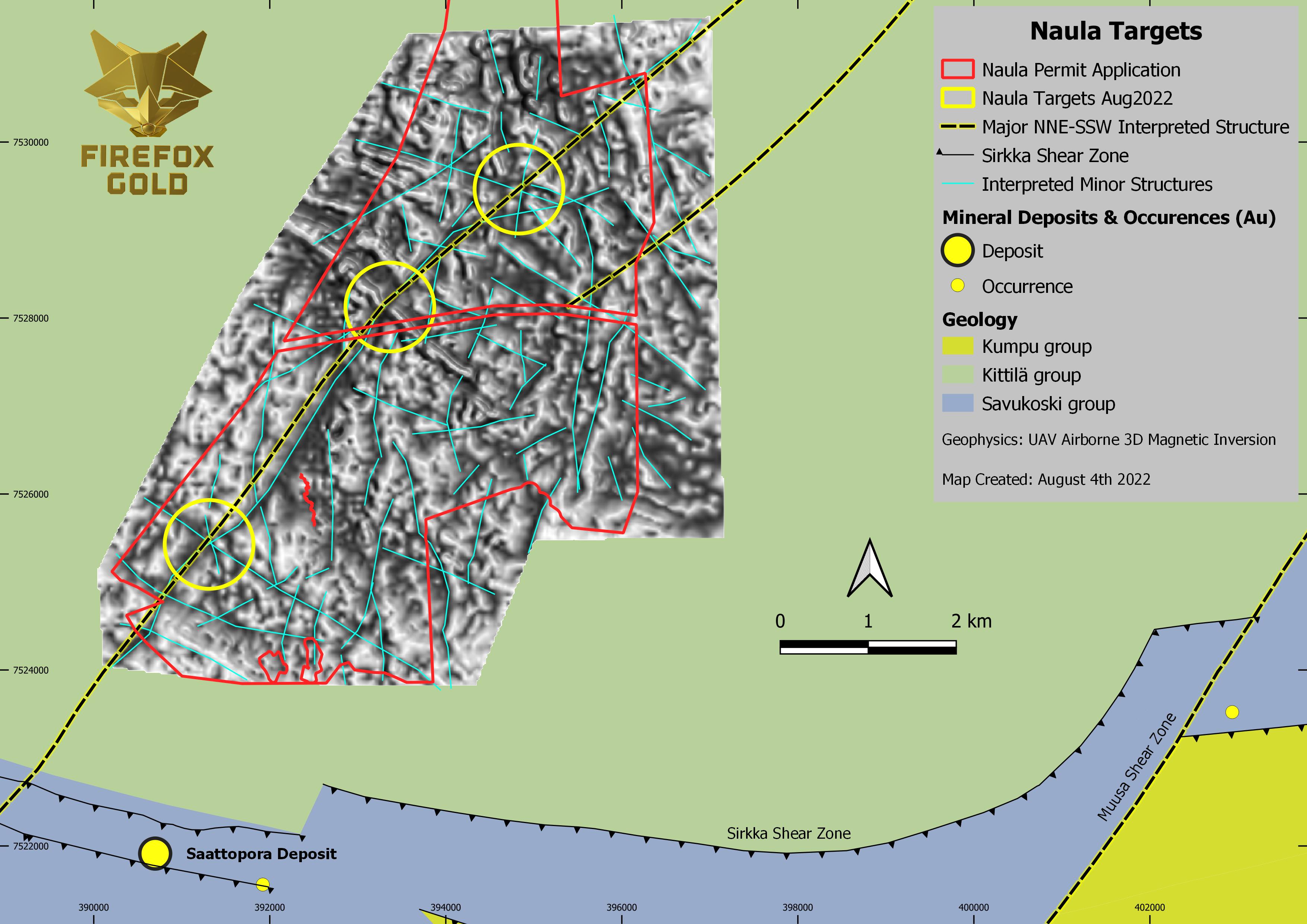 Dr. Sven Hönig, Certified European Geologist (EFG EurGeol Title # 1789) and General Exploration Manager of the Company, is a qualified person as defined by National Instrument 43-101. Mr. Hönig has supervised the field work reported herein and has helped to prepare and approves, the technical information in this news release.