In addition, drilling intersected elevated gold grades within the Gabbro Target in drill holes 22MJ004 and 22MJ013. The Gabbro Target lies farther west at Mustajärvi and has seen very limited drill testing (see Figure 1). These new narrow low grade gold intercepts associated with veining and alteration are considered encouraging for the future potential of this part of the property.

“We believe that this high-grade interval in drill hole 22MJ015 may represent the continuation of a similar vein that we intersected previously”, commented Carl Löfberg, President of FireFox Gold. “If that is the case, then this vein would have a strike length of about 88 metres and remain open along strike to the NE as well as down-dip. This style of mineralization at the contact with the hangingwall ultramafic rocks is less common at Mustajärvi and its geometry is poorly understood at depth. The alteration and low-grade gold in the Gabbro Target also confirms that the Mustajärvi mineral system spans well over 2.0km. While we await results from two more holes in the East Target, it is clear that Mustajärvi holds a lot more potential.”

Table 1, below, summarizes significant intercepts from the recent drill results.

The recently completed drill program at Mustajärvi included 23 diamond drill holes for a total of 4,624 metres between October and May, testing the Eastern Target, the Gabbro Target and the Central Zone (see Figure 1). The results reported herein are from the Central Zone and Gabbro Target, and results are pending from two holes at the Eastern Target.

The Mustajärvi Project lies along the highway between the cities of Kittilä and Sodankylä, approximately 17 kilometres east of Kittilä. The property straddles the Mustajärvi Shear Zone (MSZ), a major right-lateral shear zone that has associated second and third-order structures which further dissect the project into separate structural zones. The Sodankylä Group rocks, which are primarily to the north of the shear zone in the footwall, include metamorphosed sedimentary and volcaniclastic rocks. Geophysics and drilling have identified an extensive corridor of albite – sericite alteration in the footwall along more than two kilometres of the structure. The project remains at an early stage as FireFox and predecessor companies have drilled approximately 11,644 metres to date.

FireFox’s structural model identified repetitive dilatant zones along the MSZ where vein swarms and higher-grade gold are concentrated. Three main areas of gold with significant mineralization have been identified along a 2.1-kilometre segment of the MSZ, namely the Central Zone, the Northeast Target, and the Eastern Target.

Drill hole 22MJ015 was collared in the eastern part of the Mustajärvi Central Zone in thin glacial sediments (about 3.5 metres deep), overlying ultramafic volcanic rocks. The hole intersected a mineralized contact between ultramafic volcanic rocks and intermediate tuffites that yielded 1.0m at 46.93 g/t Au from 33.5m down-hole. Gold is associated with semi-massive pyrite mineralization at the contact zone between intensively altered ultramafic rock, with fuchsite, and intensively albitized intermediate tuffites. In addition, the contact zone mineralization is significantly enriched in silver, cobalt, nickel, and tellurium.

Drill hole 22MJ016 was collared in the western part of the Central Zone, approximately 250 metres to the southwest of drill hole 22MJ015. It was also collared in thin glacial sediments (approximately 5.8 metres deep), overlying ultramafic volcanic rocks. The hole intersected several strongly albitized intervals of alteration with a relatively small amount of pyrite mineralization. The best intercept returned an interval of 4.1 g/t gold over 1.15m starting from 94.35m down-hole. The gold in this interval is hosted in quartz-carbonate-tourmaline-pyrite (QCTP) veins related to intensively sericitized, brecciated tuffites with strong pyrite mineralization.

Drill holes 22MJ004, 22MJ008, 22MJ009, and 22MJ014 were designed to test various anomalies within the magnetic high on the western end of the permit, which has been shown to be a large mafic intrusive (gabbro). The gabbro is divided by a NE-SW trending structure, corresponding to a strong magnetic low. All these holes intersected contacts between the gabbro unit and altered intermediate tuffites of the Sodankylä group. Only hole 22MJ004 returned notably elevated gold with an interval of 0.95m averaging 0.546 g/t gold starting from 20.8m down-hole. Here, gold mineralization is related to disseminated pyrite hosted at the contact of altered mafic volcanic rocks in the hangingwall (Savukoski group) with metasediments in the footwall (Sodankylä group). No significant gold intercepts were reported from drill holes 22MJ009, 22MJ008 and 22MJ014.

Drill hole 22MJ013 was collared about 160m north of hole 22MJ009 and targeted the interpreted northern contact of the gabbro. This apparent contact is marked by a strong magnetic low, which may be linked to another through-going structure. The hole returned 1.0m averaging 0.823 g/t gold starting from 44m down-hole. This mineralization is related to narrow QCTP veins, as commonly seen at Mustajärvi. 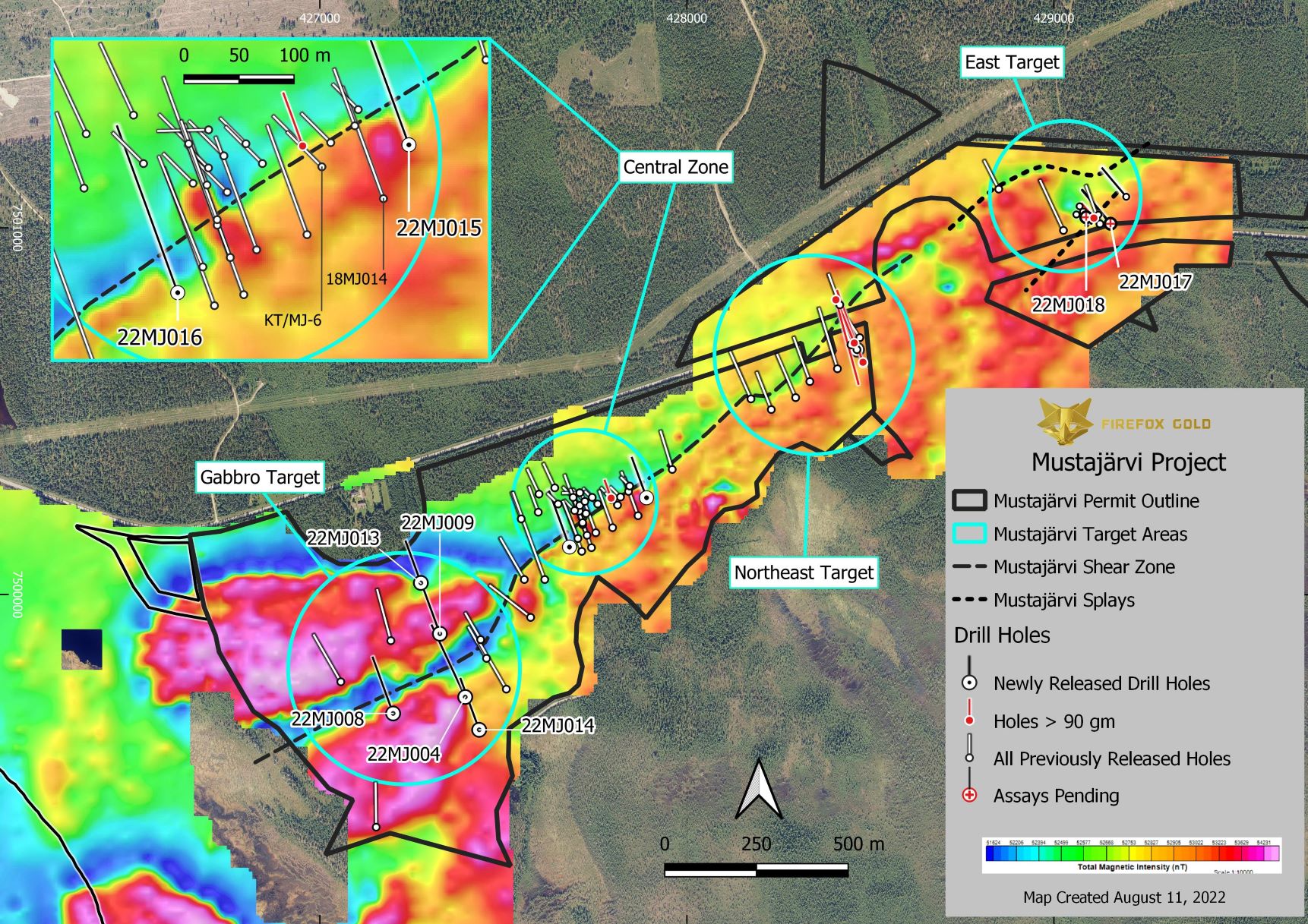 FireFox team members transported the samples to an ALS sample prep lab in Sodankylä. The samples were sawed then crushed to -2 mm, split and pulverized into 1kg pulps, before being shipped to the ALS facility in Rosia Montana, Romania for gold by fire assay of 50 gm aliquots with AAS finish (method Au-AA24). Selected samples were assayed with a 1,000 gram Au-SCR24 method (screen fire assays). Other elements, altogether 48, were measured after four-acid digestion by ICP-AES and ICP-MS (method ME-MS61) at the ALS facility located in Loughrea, Ireland.

ALS Laboratories is a leading international provider of assay and analytical data to the mining industry. All ALS geochemical hub laboratories, including the Irish facility, are accredited to ISO/IEC 17025:2017 for specific analytical procedures. The Firefox QA/QC program consists of insertion of certificated standard material and blanks inserted by Firefox into the analytical batches and analytical results of these materials  did not show deviations from recommended values.

Dr. Sven Hönig, Certified European Geologist (EFG EurGeol Title # 1789) and General Manager of Exploration of the Company, is a qualified person as defined by National Instrument 43-101. Dr. Hönig has supervised the field work reported herein and has helped to prepare and approves, the technical information in this news release.