Studies suggest there could be as much as 30 times the currently known gold resources in the CLGB1.

Since 2017 FireFox has used a combination of data compilation, till sampling, mechanized BOT sampling, and reconnaissance diamond drilling to identify numerous promising targets at Jeesiö, and has currently prioritized the Utsamo and Katajavaara Targets. Utsamo is situated directly between Aurion’s recent Risti and Launi gold discovery areas, while Katajavaara is only two kilometres southwest from the gold-bearing quartz-sulfide vein system at Launi.

Utsamo Target: This target represents a 2.8 km long structurally distinct zone, associated with numerous gold anomalies in till, that follows the contact between mafic intrusive rocks and metasediments. This feature is believed to be the continuation of the Sirkka Shear Zone.

Kataja Belt Target: From south to north, the Kataja Belt consists of three gold prospects: Saittavaara, Katajavaara South and Katajavaara North. This target is least 3 km long, and occurs approximately 2 km WSW of the Launi gold target reported by Aurion Resources. It hosts significant gold in surface samples, including a best 2019 quartz-sulphide vein sample with 6.4 g/t gold.  The highlights of rock chip samples from the summer 2020 program in this area include boulder samples of 2.6, 2.75, and 4.73 grams per tonne (g/t) gold and outcropping quartz-magnetite-sulphide veins containing 10.5 g/t gold. [These higher-grade samples are not representative of the entire target area, but are indications of local intense gold mineralization that has not yet been tested with trenching or drilling.] 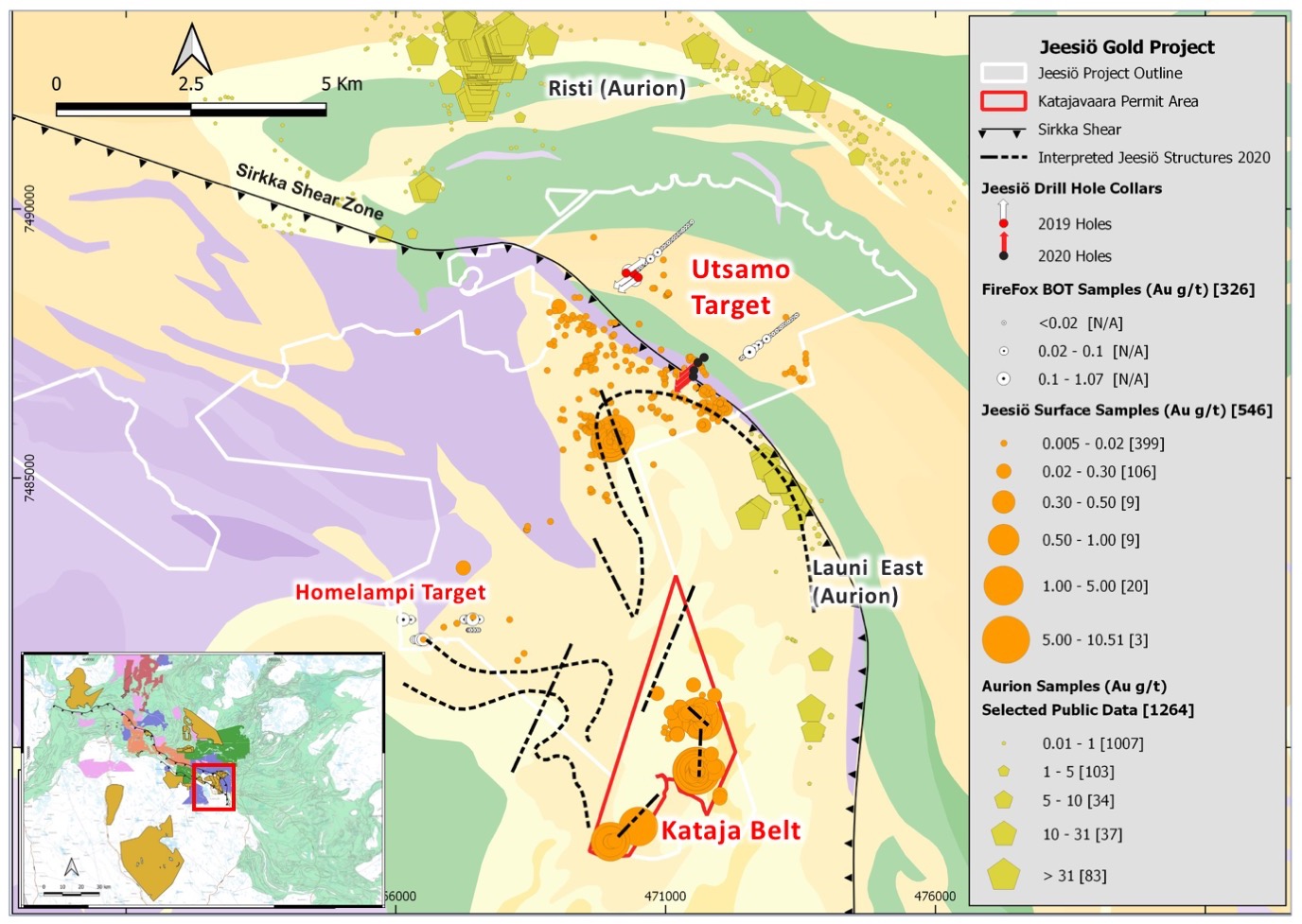 The Jeesiö project is in Lapland, the northernmost province of Finland. The entire property is accessible via paved highway and secondary paved roads. The nearest towns are Sodankyla (pop 8,556) and Kittilä (pop. 6,358).  High voltage power lines cross the property.

The northern boundary of the Jeesiö exploration permit application is three kilometres south from the recent Aamurusko (Risti) gold discovery by Aurion Resources Ltd (TSX-V:AU www.aurion.com), and 12 kilometres south-southwest from the Pahtavaara Gold Mine, currently being recommissioned by Rupert Resources Ltd (TSE:RUP www.rupertresources.com). Numerous smaller drilled prospects and deposits are in the vicinity of Jeesiö.

FireFox cautions that proximity to a discovery, past-producing mine, or mineral resource, does not indicate that mineralization will occur on FireFox’s property, and if mineralization does occur, that it will occur in sufficient quantity or grade that would result in an economic extraction scenario. Results from other companies in Finland, including properties proximal to those controlled by FireFox, are not indicative of expected FireFox results,as there has been insufficient exploration on the properties held by FireFox. These facts were simply used to help prioritize the acquisition of these properties. 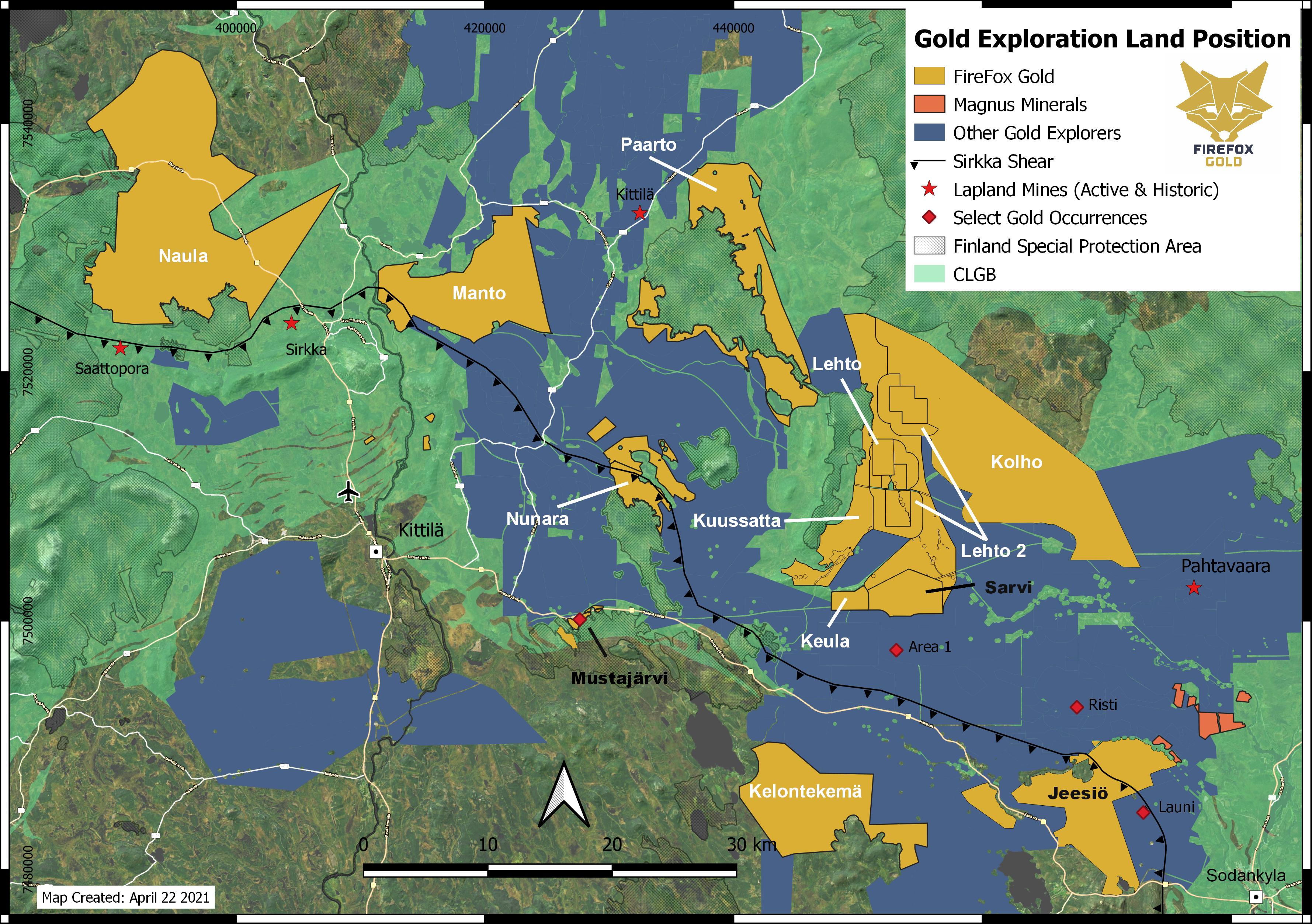 The Jeesiö Project is comprised of approximately 142 km2 of property holdings, 100% held by FireFox.  Approximately 60km2 are subject to a 1.5% NSR and a payment to Magnus Minerals of 1000 troy ounces of gold upon commercial production. For details, please refer to the latest Financial Statements.

Work Completed by FireFox to Jan 2021

2017:     FireFox acquired the property in August of 2017 and performed reconnaissance till sampling using a handheld Cobra drill. FireFox collected 284 samples from depths of 0.2 to 6.0 metres.

2019:     FireFox completed additional bedrock sampling and mapping throughout the project, as well as trenching at the Homelampi target. Ground geophysical surveys and geochemical sampling programs were completed at the Utsamo target, followed by a 3-hole reconnaissance drill program.

2020:     Mapping and surface sampling identified three new targets, termed the Kataja Belt, to the south of Utsamo.  The summer program included a UAV magnetics survey over the entire project area, as well as trenching and additional sampling at Utsamo.  In the fall, a second recon drilling program of four holes was completed at the Utsamo target.

There has been no geologic mapping reported on the Jeesiö property. Most of the project area is covered by a few metres of glacial till and outcrop is very scarce. Regional mapping is largely based on geophysical interpretation. GTK’s regional 1:200,000 mapping program indicates that much of the property is underlain by Archean-aged clastic sedimentary rocks which is intruded by younger Paleoproterozoic-aged gabbro sills and granitic rocks.

In Orogenic-type deposits, structure controls gold emplacement. Most of the Jeesiö property lies south of the Venejoki structure. Only a few sections of the property are situated to the north of the Venjoki structural break. In this area, the property is underlain by quartzite and Paleoproterozoic-aged gabbro sills as well as biotite paraschist and mafic volcanic rocks.

The Venjoki structure is over 100 km long and lies 5-to-25 km south and is subparallel to the Sirrka  structure. The Venjoki structure represents a thrust zone where Paleoproterozoic and Archean-aged rocks were pushed northward over the Central Lapland Greenstone Belt.  North to NE strike-slip shear zones related to this regional thrust are associated with several gold occurrences in the region.

For additional details, please refer to the Technical Report.