North of its flagship Jeesiö and Mustajärvi projects, FireFox Gold has built a large portfolio of gold-prospective properties and projects in Finland’s Central Lapland Greenstone Belt. The portfolio has been expanded from the original Seuru Gold Project optioned properties, and now comprises over 450 km2 of tenements.  The large size of the land holdings gives FireFox the opportunity to make strategic investment / joint ventures for some properties while retaining full control on core properties of interest. 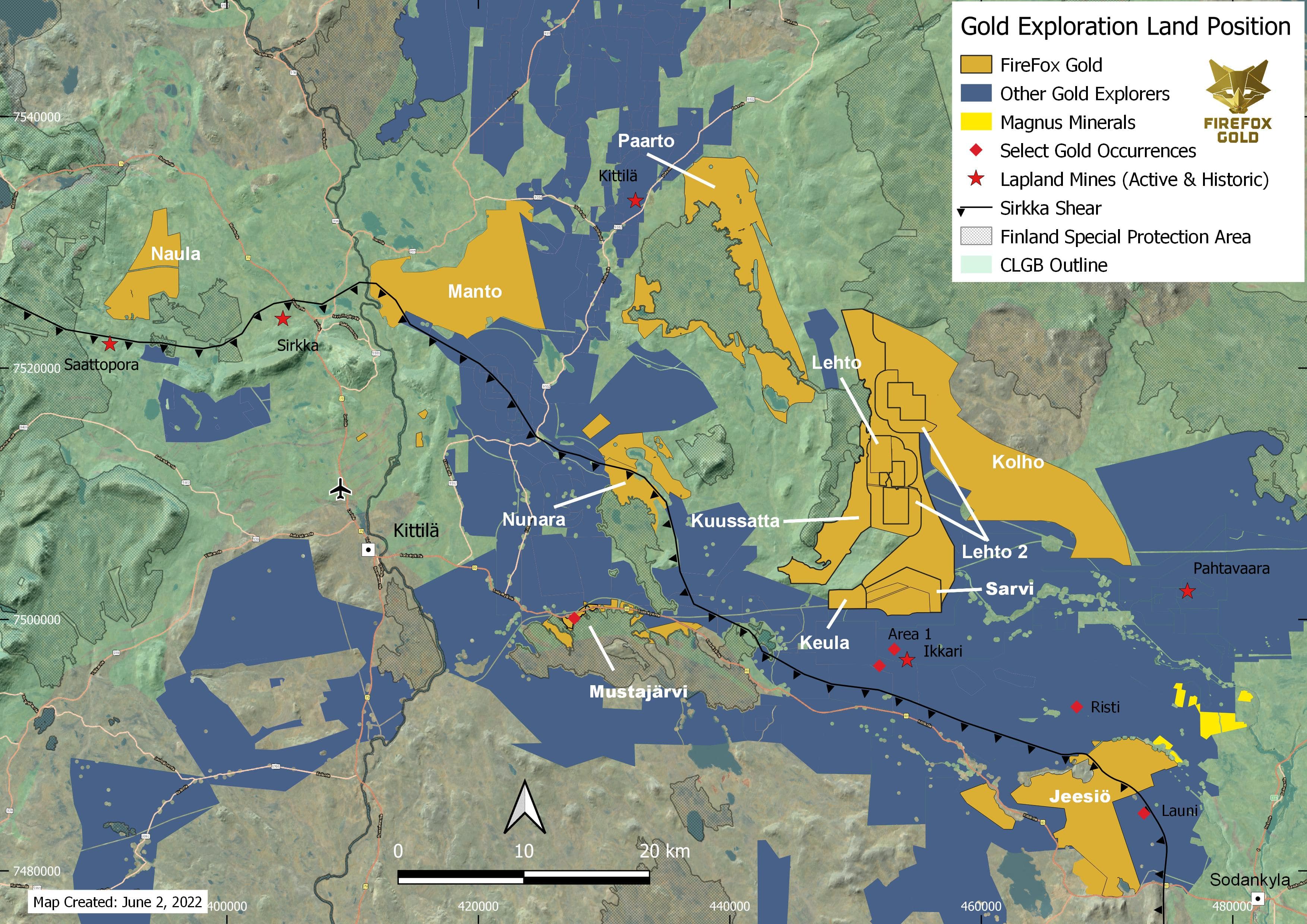 Many targets in the Northern Group properties occur in mafic volcanic rocks, similar to the host rocks at Agnico Eagle’s Kittilä Mine (Suurikuusikko), the largest primary gold producer in Europe.  Some properties include known gold occurrences, historic drilling and other exploration work.

Within the portfolio, the Sarvi Project (Sarvi, Sarvi2 and Keula properties) is a core area of focus for the Company. The Sarvi Project is adjacent to Rupert Resource’s Pahtavaara/Area 1 property, and the central area of Sarvi is within 5 kilometres of Rupert’s Ikkari discovery zone, which, along with the Kittilä deposit, provides an important exploration model. Sarvi is still relatively un-explored but has returned good indications of gold potential from surface exploration, including recent and historic drill results, gold in micronuggets, trenching and geophysical surveying.

FireFox cautions that proximity to a discovery, past-producing mine, or mineral resource, does not indicate that mineralization will occur on FireFox’s property, and if mineralization does occur, that it will occur in sufficient quantity or grade that would result in an economic extraction scenario.

FireFox has also completed initial reconnaissance work and geophysical targeting at the Kolho and Naula property groups, and initiated applications for Exploration Permits that will allow for detailed exploration, including drilling. 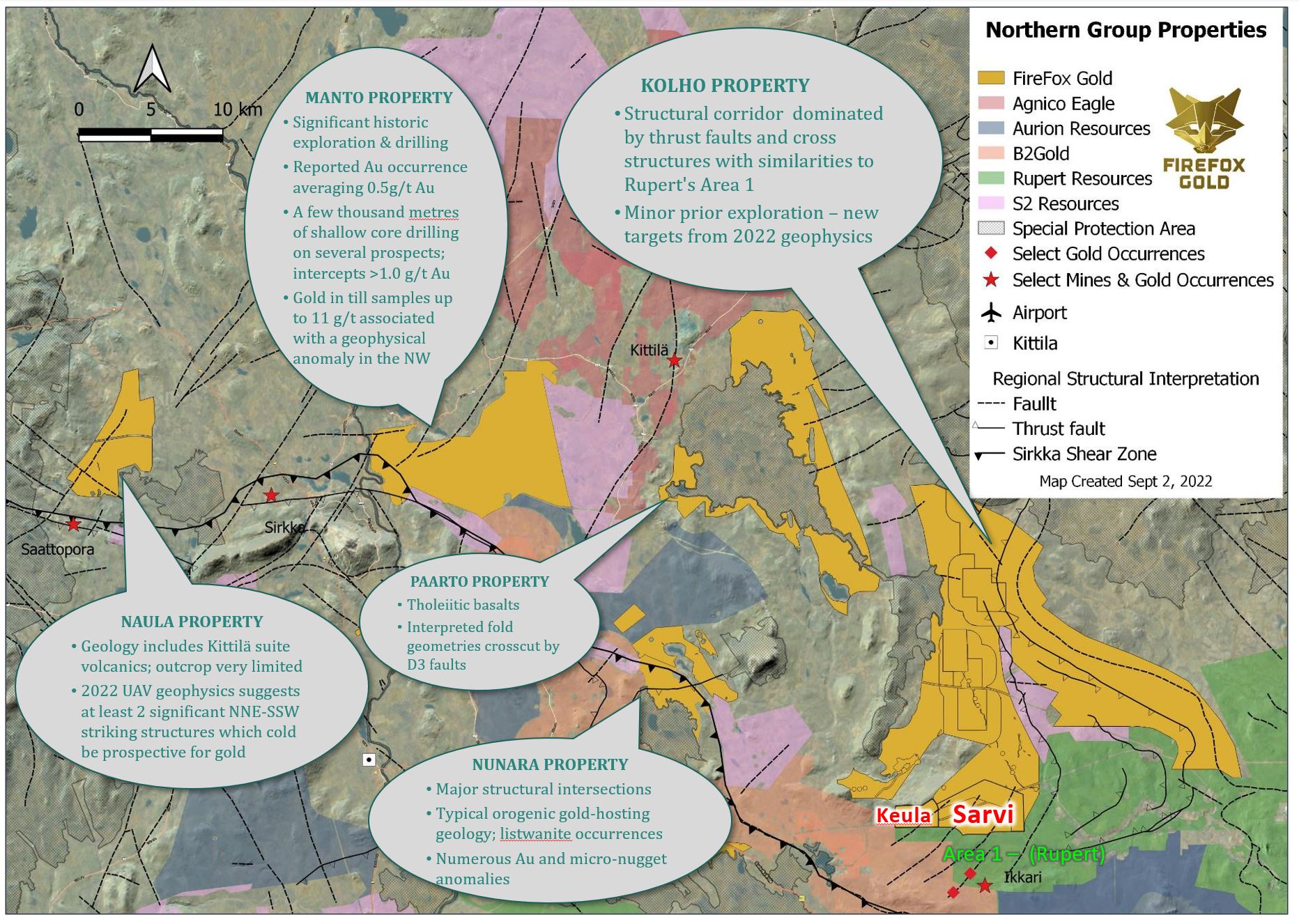 The Northern Group of properties is in Lapland, the northernmost province of Finland.  The project is road accessible and the area is serviced by two local towns, Kittila and Sodankylä. Agnico Eagle’s Kittilä Mine property, an underground gold mine and Europe's largest primary gold producer, is situated approximately 20km to the northwest.

The Northern Group consists of eleven properties, seven of which have exploration reservation status or permit applications (Lehto 2, Kolho, Nunara, Naula, Kuussatta, Manto and Parto) and four with valid exploration permits that allow for drilling (Sarvi, Sarvi2, Keula and Lehto).

Several of the properties are governed by the conditions of the Seuru Option Agreement, for which an NSR and its conditions will apply. For details of the Seuru option please refer to the latest MDA & Financial Statements.

The Northern Group of Properties is located within the Central Lapland Greenstone Belt (“CLGB”), a poorly explored package of Paleoproterozoic-age mafic volcanic and sedimentary rocks which underwent three ductile compressional events around 1.79-1.92 Ga followed by one or more brittle stages.

Bedrock in the Sarvi area includes sulphide bearing rocks of Porkonen formation with mafic tholeiites and mafic graphite tuffs. Studies by the Geological Survey of Finland (GTK)(2009-2010) showed gold potential in this part of the Porkonen formation supported in GTK drill results from 2009 that intersected up to 3.57 g/t Au over 0.45 m (U441/2009/R8). The Kiistila Shear Zone, which hosts Agnico Eagle’s Kittilä Mine, cuts through the Porkonen Formation to the northwest from the Sarvi Project. FireFox geologists noted anomalous Au, Ag, As, Sb, Bi, Cu, Mo, Zn, and other elements in trench and BOT sampling in this part of the Sarvi Project. Prospecting also revealed localized areas of outcrop exhibiting silicification, partially oxidized sulfide minerals (gossan), and highly anomalous As and base metals.

The first drill campaign at Sarvi was undertaken in Q4 2021 and Q1 2022. The program included 12 widely-spaced drill holes totaling 2327.8 metres. The results were highlighted by drill hole 22SA001, which returned a best interval of 17.0m at 0.134 g/t, with much of the upper portion of the hole anomalous in Au, and gold enrichment always associated with elevated Ag, As, Sb, Bi, Cu, Mo, Te, and Zn. The drill passed through graphite-bearing tuff and schists in the upper portion of the hole with occasional semi-massive to massive pyrrhotite (lesser pyrite) that appear to be exhalative in nature. The exhalate horizons are sometimes cut by iron-carbonate veins and stockworks. At greater depths in the hole, sphalerite (zinc sulfide) is associated with the iron-carbonate veining. Copper and zinc are also broadly elevated in the hole, but isolated maximum values in the hole are 0.2% for Cu and 0.54% for Zn. Below the anomalous sulfide-rich zones in the tuff and schists the drill hole passed into more massive mafic volcanics without abundant sulfides.

Given the wide spaced drilling and limited sampling in the area so far, this target remains open in all directions for follow-up exploration.

The Kolho property straddles a 23-kilometer-long thrust zone which is a major geologic break – the eastern contact between the Kittilä suite and Savukoski group rocks. The thrust verges to the east, towards the Sodankylä group quartzites and the Archean Pomokaira complex (granodiorites and tonalite gneisses).

The Kolho Property is structurally complex and hosts a lithologic package analogous to that seen at Rupert Resources’ Area 1. Magnetics data interpretation revealed multiple areas where these prospective lithologies are either significantly folded or cross-cut by several proposed structures, providing strong exploration targets for additional work.

In 2022, FireFox completed a detailed airborne magnetic survey over the 100% controlled Naula Project in the western portion of the CLGB.  The survey data appear to indicate the presence of at least two significant NNE-SSW striking structures that had not been previously mapped. If confirmed, such structures can be highly prospective for gold in Lapland. Flexures in the major structures and their intersections with other faults are high priority targets for follow-up exploration.

Summary of Work Completed by Firefox to January 2022

2020: The summer program included mapping and sampling throughout several of the properties.  A UAV airborne geophysics survey was completed over the Sarvi & Keula properties.

2021: A ground magnetics survey at Sarvi was followed up with mapping, BOT sampling and trenching. By the end of the year 1,399 BOT samples were collected and 10 trenches were excavated for a combined length of 479 metres. In total 169 channel/chip samples and 74 grab samples were collected. UAV magnetics surveying campaigns were conducted and FireFox now has nearly 140km2 of contiguous coverage stretching from Sarvi to Kolho.