The 107 km2 Ylöjӓrvi Gold Project is focused on mobile-belt-hosted high-grade gold targets anchored by gold mines to the east and west.

FireFox cautions that proximity to a discovery, past-producing mine, or mineral resource, does not indicate that mineralization will occur on FireFox’s property, and if mineralization does occur, that it will occur in sufficient quantity or grade that would result in an economic extraction scenario. These facts were simply used to help prioritize the acquisition of these properties.

FireFox is earning a 100% interest in the Ylöjӓrvi properties from Magnus Minerals per the agreement described in the August 1, 2017 news release. The agreement requires a combination of common shares issuance (completed) plus $250,000 cash and $2.5M in exploration expenditures over a three-year period. Magnus Minerals retains a 1.5% NSR which may be reduced by 1% in return for the payment to Magnus of 1000 troy ounces of gold. The agreement also includes properties in the Jeesiö and Riikonkoski Projects.

The Ylöjӓrvi Project is located in southern Finland, approximately 30 kilometres on paved highway from the city of Tampere (population approximately 220,000).  The Project shares its western boundary with the historic Haveri Gold Mine property. The currently operating Orivesi Gold mine, (owned by Dragon Mining), lies approximately 30km to the east.

Ylöjärvi is located in the western branch of Tampere Schist Belt, a volcano-sedimentary belt well-known for its historical and active gold mining.

The Haveri Gold Mine produced approximately 142,000 ounces of gold and 6,000 tons of copper before being closed in 19601.  Remaining mineral resources at Haveri are estimated to be 24.7Mt @ 0.89 g/t Au (non-NI 43-101 compliant)2. FireFox´s reservation surrounds the historical Ylöjärvi Mine that produced small amounts of copper, gold, silver and tungsten between 1943-1966. Some 30 kilometres east from Ylöjärvi, along the same sericite-altered volcanic sequence, Dragon Mining Ltd. (ASX: DRA www.dragonmining.com) is operating its Orivesi Gold Mine that has produced in excess of 500,000 ounces of gold.

FireFox cautions that being near a past-producing mine, with a resource, does not indicate that mineralization will occur on FireFox’s property, and if mineralization does occur, that it will occur in sufficient quantity or grade that would result in an economic extraction scenario.  These facts were used to help prioritize the acquisition of these properties.

In-house exploration targeting work emphasised the strong similarities in the chemical composition, style of alteration and structures of the volcanic sequences and soil geochemistry of the Ylöjärvi Project with those features observed near the gold mines of the region. Gold in the area is usually associated with pyrite or arsenopyrite and hosted by quartz veins in altered volcanic rocks or shear zones in granodiorite.

The prospectivity of the project is supported by the presence of high-grade glacial erratics and gold anomalies in till or soil, as reported in the Geological Survey of Finland (GTK) database.  Additional exploration work will have to be performed in order to ascertain whether there is continuous mineralization associated with these initial indicators.

The area of Ylöjärvi tenement has seen only minor exploration work in the past. During 2017 field season the Company conducted reconnaissance geological mapping, soil sampling and Self Potential (SP) line surveys on selected targets. 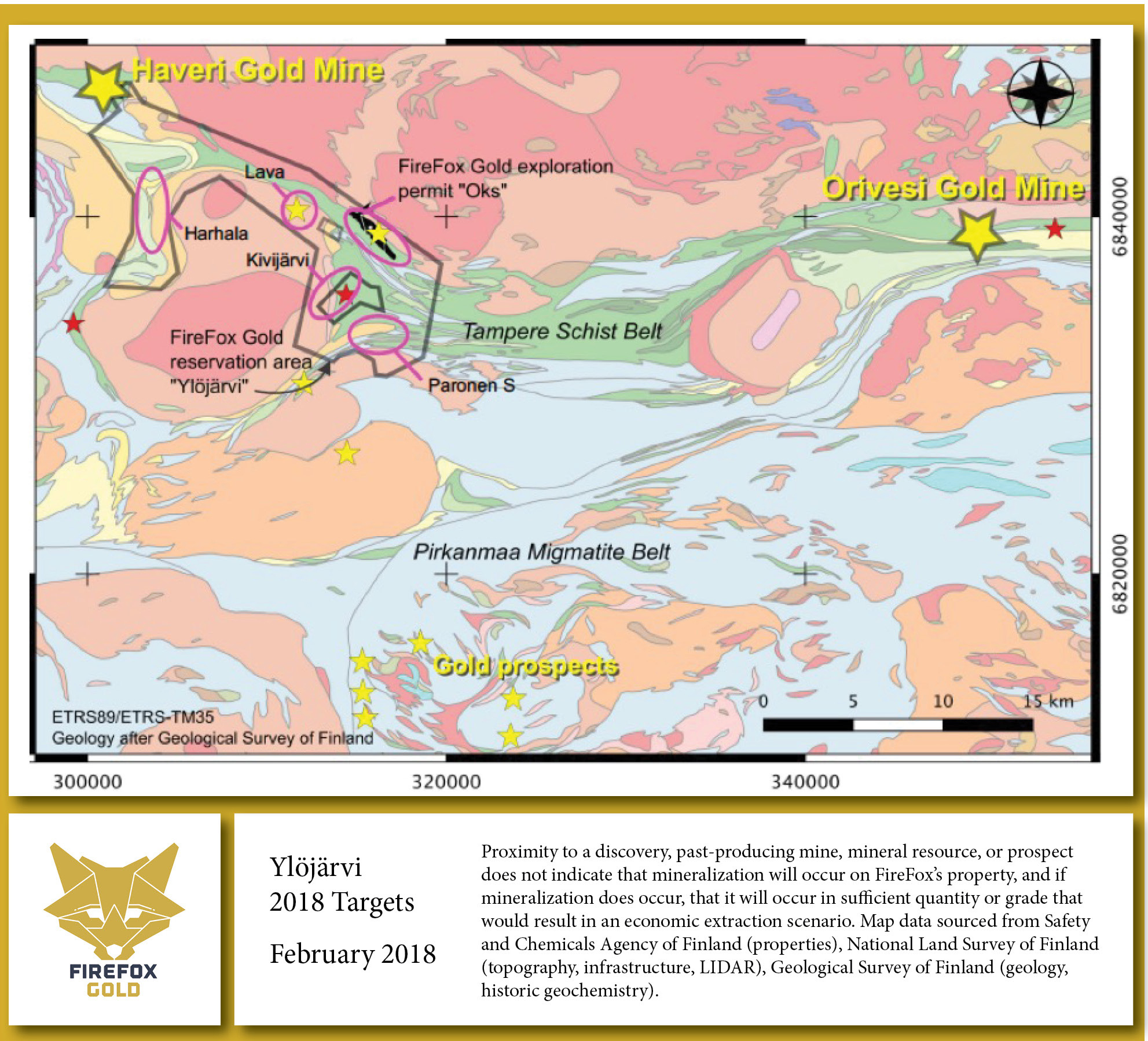